Long time no see & a battle report (Tigers at Minsk)

Apart from a couple of random posts, the last post here was from 2014. If it were a forum post it's the kind of thing you wouldn't revive, though times are strange with a global pandemic and suddenly a lot of free time on my hands. After spending some time sick and getting burnt out/tired of running games of Dungeons & Dragons and other role playing games for my friends, I was feeling the urge for some solo play. I'd tried some solo d&d before, though the idea of making characters and such didn't appeal to me at the time. Eventually, I found my way to the reading list.

It's nice to see many of the blogs I followed and read are still going, and strong! I'm not sure if inspired is a good way to refer to how I feel about potentially getting back into wargaming and figure collecting/painting and such. I was tempted at various points to buy some warhammer figures to glue together and paint during tough periods of university, though money and space were lacking. Now having left uni and being, for the time being at least, without work until the UK lock down is lifted, perhaps I shall use this time to dip in the proverbial toe.

I have ideas, and I could ramble, but I decided instead to simply print out a hex sheet, cut up some cardboard, and grab a pen and a copy of Tigers at Minsk, a simple ruleset for WWII gaming. I have very little space, but managed to fit the 6x8 hexes on a sheet of A4 paper. I could have made the tokens pretty, with custom art and such, but I knew if I dallied too long I would lose momentum. So, with some tokens and the starter scenario in hand, I jumped in.

The scenario is simple enough. 6 German sections and HMG support must reach the Russians' base line before the time runs out. The Russians have a couple of infantry sections and a couple of HMGs, as well as good cover in a pair of villages/BUA and open lines of fire that the Germans have to cross.
Closest to the camera are the Germans, across the board are the Russians.

Initial deployment. The Russians place HMGs in the villages, while the Germans form a line in the forests with a couple of sections on the right ready to make the dash across the open. 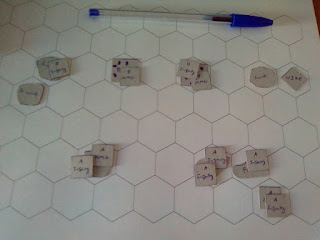 The first couple of rounds begin with both sides opening fire, with the Germans taking the worst of it. They lose two squads in the forest to a HMG and another in pinned. However, the HMG malfunctions on the second turn! The "assault" group moves up and lays down smoke, attracting some fire but no damage is dealt. 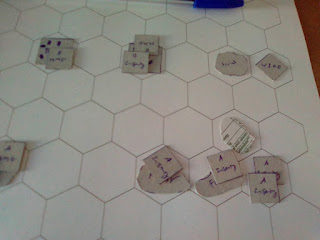 Behind smoke cover and knowing the HMG is down, the infantry press on, hoping to cross the gap while the other HMG is pinned. 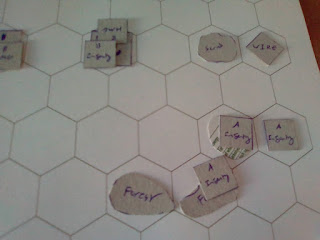 On the German left, more luck as the other HMG is knocked out. While the left spent most of the fight out of command, they performed pretty well. 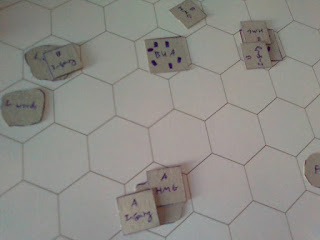 The infantry squad on the Russian left try their best to pin and/or destroy the attackers, but there are just too many. Along with the random event Inflitration that gives both side a single unit one move, the Germans are rushing on. 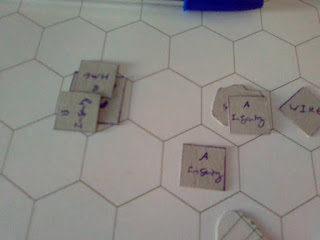 The second squad is locked in the village by the German HMG, while the German right pours fire into the other squad. The section closest to the Russian base line (top right) is pinned, but no more. 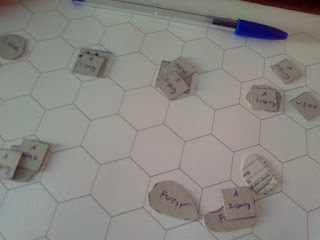 A German victory! A rough beginning and nearly out of time, a lot of luck pulled them through on this one. 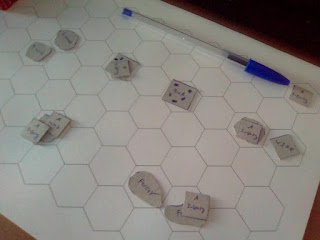 I'm pretty sure I misplayed parts, like not using opportunity fire enough for the Russians. Most play throughs I've read of the scenario the Russians win, as crossing the open under two HMG fire is horrendously dangerous. Though the HMG malfunctioning early really helped I think and, once out of sight of the troops in the other village, the lone Russian squad just didn't have the firepower to contest.

Overall I really enjoyed it. Quick, easy to grasp, just need to print a reference sheet rather than flick through the pdf all the time. I think I shall play the other scenarios in the book, and from then, we shall see.

I hope you are all doing well in these strange times
Publié par Maxamillian à 12:25